Haven’t really posted much since we started the search for our house… Never even posted we found the house. We’ve been living there for over a year now. So far, most of our efforts have been inside the house. New kitchen and stuff.

But now it was time to start with the back yard. It was a total mess. Only thing I’d done about it was putting up the garden fence again. But there’s a lot of height difference. A maximum of 30cm, but if we’d have to fill up the whole yard it would have been too costly, and there’d be a difference at the gate at the back of the yard. So, we decided to build a wooden terrace of about 3m to compensate half the difference. The rest of the yard will have to be filled for about 10cm on average. So…. first to remove the tiles: 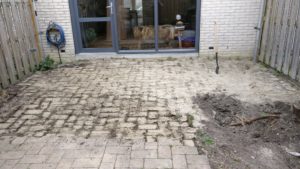 That took a while… but, second day, this was the result. A little bit of equalizing and I could start drilling holes and hitting poles! 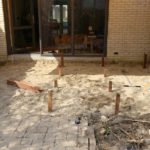 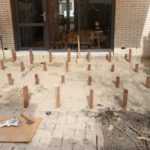 Yeah, that was a bit harder than I expected. And to be fair, I have a hell of a lot of poles left. There were supposed to be a lot more there, but it was a rediculous amount. And since I’m using Bankirai wood, I expect it to be a bit more sturdy compared to Douglas wood.

So, lots of drilling and hitting poles with my bigass hammer…. and this happens: 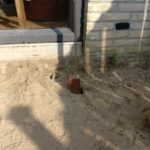 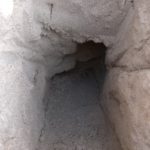 Hitting and hitting and all of a sudden the pole nearly vanishes… turns out, there’s a space beneath the ground near the house. I either had to dig up the whole lot and put concrete in… or get me 9 longer poles. Guess what the easiest option was? Yep, 9 more poles! 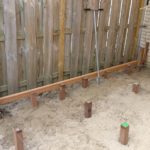 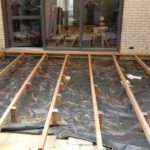 After that I could start with the beams! And the first board, which I had to cut out a bunch to fit with the window and door. And more boards to follow… 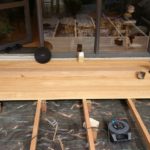 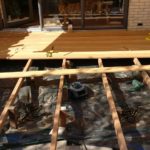 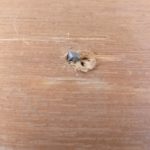 And yeah, that’s a broken drill. Bankirai is freakin’ hard! No way to get it out and unscrewing the screws damages the boards… so, a hammer. It’s beneath the future loungeset, so it’s fine.

So, after 8 days of work, on Saturday afternoon, all the boards were screwed on. Time to build the loungeset and relax, was getting way too hot to continue! 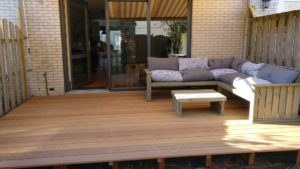 Sunday morning, time for some lights! We got a bunch of LED lights, 6 in the last board on top and 4 in the board on the front side. There’s a switch in the livingroom. I’m thinking about putting a z-wave switch in there to automate it, but for now, this works just fine! 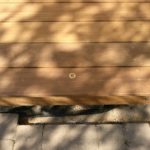 Fase 2 is a border, which I’ll be building with the tiles I got from the old terrace. They’re pretty much bricks. So, some concrete as a foundation and building a border with those bricks and glue. Was considering making it out of wood too, but… stone is a bit better when it’s filled with earth.

Fase 3 with be a shitload of sand and earth to make the rest of the yard about 10cm higher. Some grass between the terrace and the shed. And on the side of the shed, those tiles will return.